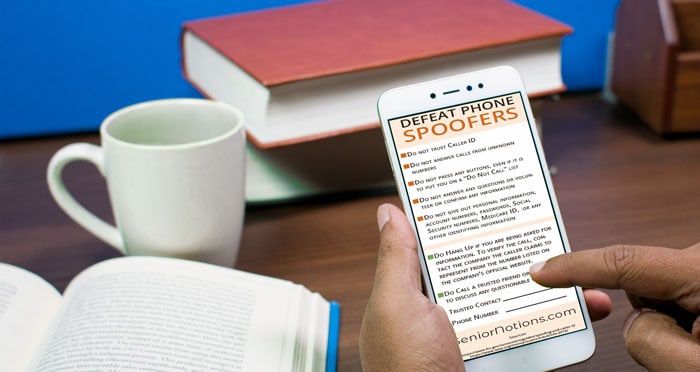 Senior phone scams are on the rise. Most of us know we shouldn’t give out personal information like Social Security or Medicare numbers to people who call us, no matter how official they might try to sound. We’ve heard the spiel enough times to feel confident we wouldn’t let ourselves get taken by phone scammers.

Quick Links show
Is “Virtual Kidnapping” Real?
What is Spoofing?
How to Handle a Spoofed Phone Call?
Is Your Voicemail Vulnerable to Spoofing?
Is Spoofing Illegal?
Can Spoofers Display Official Government Numbers?
Can Older Adults Defeat Caller ID Spoofing Scams?

But are we really that resistant? What if the caller says they are calling from the IRS? Your local police department? Even your own child or grandchild? What if the Caller ID display confirms the name and number?

Like our joint and muscle strength, our psychological defenses can weaken as we get older. And as we are getting weaker, the scammers are becoming more cunning.

A frightening scenario, to say the least. But who would fall for this “virtual kidnapping” plot? Who wouldn’t just call their child’s phone and check? The scammer had that covered. He had told them not to to call her cell phone because he had her phone and if they did, he would know and he would “put a bullet in her head.” The Caller ID had displayed her number and the call came through with her ringtone. I wouldn’t want to take that gamble.

The girl’s father followed the supposed kidnapper’s demands. As he drove to Walmart, the girls mother used another phone to call the daughter’s work number. The mom determined the girl was safe at work and in no danger, thankfully. She told her husband (he had been stalling the “kidnapper”), who berated the scammer and hung up.

While this couple’s experience was harrowing for 47 tense minutes, they were fortunate in that they did not lose any money through the untraceable gift cards. Scammers, like the ones who terrorized Dr Phil’s friends, and the money sent by frightened victims can disappear without a trace. But how could a kidnapper appear to be calling from their daughter’s number? This is a practice scammers use called “spoofing” according to Dr Phil’s guest expert, a private eye.

Spoofing, according to the FCC website, is when “a caller deliberately falsifies the information transmitted to your caller ID display to disguise their identity.”

This isn’t difficult to do and a lot of these scammers are not hi-tech computer hackers. All the scammer needs is an app, which is easily downloaded from the Internet, and your phone number.

How to Handle a Spoofed Phone Call?

The FTC recommends that you

Don’t feel afraid or intimidated by anyone who calls you on the phone looking for information or money. No one will be mad at you for double checking these types of calls, even if they are legitimate. I’ve gotten calls supposedly from an insurance carrier that seemed legitimate, but when they asked for information, I hesitated. I had heard I should not give out information to people who call me. I was told to only give personal information when I initiate the call myself. I excused myself from the conversation, hung up, and called the company. It turned out that the company representative I talked to legitimized my concern and was happy to help.

Is Your Voicemail Vulnerable to Spoofing?

I thought I was somewhat educated about phone scammers, but the following caution from the FCC took me by surprise:

“If you have a voice mail account with your phone service, be sure to set a password for it. Some voicemail services are preset to allow access if you call in from your own phone number. A hacker could spoof your home phone number and gain access to your voice mail if you do not set a password.”

It makes sense though and I double checked that even when calling my voicemail from my home phone, I have a password in place. This helps keep my phone a little more secure so that no one without the password can gain access to my messages.

While spoofing does have some legitimate uses (businesses and medical professional for example), according to the FCC,

“Under the Truth in Caller ID Act, FCC rules prohibit anyone from transmitting misleading or inaccurate caller ID information with the intent to defraud, cause harm or wrongly obtain anything of value. Anyone who is illegally spoofing can face penalties of up to $10,000 for each violation.”

Spoofers will also display random numbers with your local area code (a scam called “neighbor spoofing”) to make you think it is a local call coming in. The scammers believe you would be more likely to answer a local call, even if a name isn’t displayed.

Keep in mind your phone number can be spoofed, too. If you get irate calls from people telling you to stop calling them, your number may have been spoofed by scammers using it to scam money from others. This happened to me, although I didn’t know it at the time. The people being called simply call the number back that shows on their phone, and they are generally very unhappy, to say the least. The scammers move on after a while and stop using your phone number, thankfully.

In the article AARP quotes the acting Inspector General of Social Security,

“SSA employees do not contact Americans by telephone for customer-service purposes and ask for SSNs or financial information. Further, SSA employees will never threaten you for personal information or promise you a Social Security benefit approval or increase in exchange for information.

The amount and types of scams being perpetrated on seniors is seemingly endless. Learn more about other types of scams on AARP’s Fraud Resource Center.

Scammers prey on older adults because they know they are more vulnerable and are more likely to have money or property saved over a lifetime. The callers work to evoke anxiety, fear, and distress in the older person in that moment so they cannot logically process other options. Once a scammer has their target in an emotional state of mind, they’ll try to get the person to act impulsively so they will do whatever the scammer tells them to do.

It may help to have the name and number of a trusted family member or friend to call if you get a call from someone asking you for money. Discuss beforehand with your trusted person that in the event you get one of these calls, you will call them before giving out any money or information to unsolicited callers. If you do get a call like this, hang up from the conversation and call your trusted friend or family member and ask them to help you sort out if the call is legitimate.

Scammers will play on an older person’s emotions and fears. My kids made up a printout (compiled from information on the FCC and AARP websites) to keep with our phones so that we can think logically and not rely on our emotions if called by a persistent, threatening, or frightening individual. Click on the Defeat Phone Spoofers image to download a pdf copy of our Defeat Phone Spoofers Printout.

Have you been contacted by a scammer? Let us know in the comments below. Your experience may help others.

This site uses Akismet to reduce spam. Learn how your comment data is processed.

As an Amazon Associate we earn from qualifying purchases.